Retail spending—excluding autos and fuel—looked better in March as a whole. Outside of online sales, however, most retail sectors showed weakness in one way or another.

Weather likely contributed to some of the month-to-month weakness at a range of mostly homegoods-related stores. They slowed from relatively strong February sales, which were boosted by a mild winter. 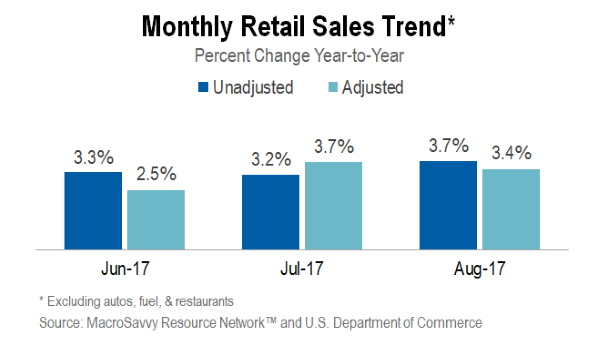 Overall, the year-to-year gains were strongest in terms of seasonally adjusted sales. Those sales excluding autos, fuel, and food service were up 4.3% in March while unadjusted sales were up 3.5% from a year ago.

The government-reported sales continue to provide mixed evidence that a post-election surge in consumer spending confidence is translating into stronger spending. See more on confidence here.

For 2017, MacroSavvy™ has forecast a gain of 4.0% in retail sales excluding autos, fuel and restaurants, which would be slightly stronger than 2016.