Brick and mortar retail gains for the November-December holiday were about 2.4%–given topline sales gains that were revised down a bit to 3.9% and online gains that came in at an estimated 14.9%.

The results were slightly higher than expected. The in-store results, however, were still relatively weak and showed gains focused in some unexpected places, according to the latest data now available. 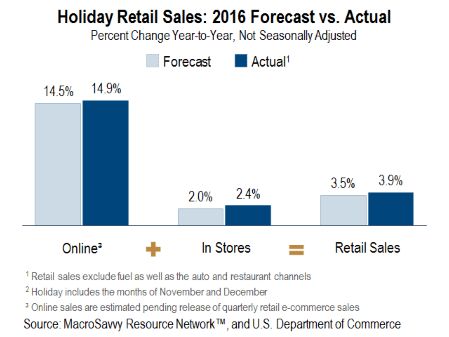 This is based on non-seasonally adjusted retail sales reported by the government, which has released revised monthly data for the holiday months and new quarterly retail e-commerce results.

Here’s what we now know—as also illustrated by the accompanying charts:

Outside of the November blip, the latest retail data do not yet show a sustained payoff from the post-election jump in spending confidence driven primarily by Boomers (see post here). That may be explained partly by the lagging confidence of Millennials.

Note that the retail sales measures referenced are for sales excluding autos, food service, and fuel. For background on the MacroSavvy™ holiday forecast, see the original post here.