The 4% gain in holiday sales for November-December was stronger than expected and stronger than a year ago—by about half a percentage point on both counts.

The better results occurred partly at brick and mortar stores—not just online. The in-store results, however, were still relatively weak and with gains focused in some unexpected places, according to the initial government report on retail sales through December. 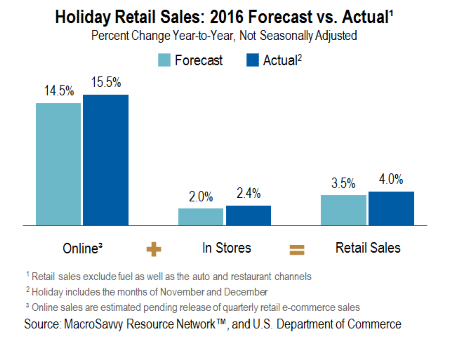 Online retail sales for the holiday months were strong at about 15% growth, but remain estimated based on the government data pending a retail e-commerce sales report due on Feb. 17.

Here’s what we know so far—as also illustrated by the accompanying charts:

Outside of the November blip, the latest retail data do not yet show a sustained payoff from the post-election jump in spending confidence driven primarily by Boomers (see post here). That may be explained partly by the lagging confidence of Millennials.

Note that the retail sales measures referenced are for sales excluding autos, food service, and fuel. For background on the MacroSavvy™ holiday forecast, see the original post here.